Yeah, except it’s week 9, but whatever, you guys aren’t counting.

Are you? I don’t care. Neither does Little A. He’s too cool to care. 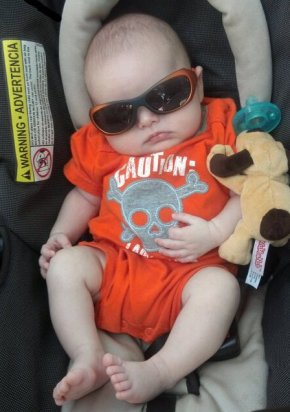 We had our eight week doc appointment on Monday. He is now 10.4 pounds, up from 6, and 22 inches, up from 18. He is still a tiny little thing – both land him around the 10th percentile. He better start practicing for standardized tests now, because those percentile score will not fly in our house. But for now, they’re okay, since he is growing well and the doc was happy with it. I guess I can be, too.

He handled his vaccinations surprisingly well. I was all set for both of us to be a puddle of tears, wails and overemotion. He wailed once, did some lip quivers and was good to go. Didn’t even turn the shade of purple I was warned about.

So I guess we’re ass kickers. For that round anyway.

We’re seeing more and more smiles and even though we practically have to hyperventilate in order to make them happen, they are so worth it. More smiles are appearing on us, too, since the kid is thisclose to sleeping through the night and giving up the 4 am feeding. Feetie pajamas seem to be the key to everything.

Except this morning when he woke up an hour before and an hour after the “Daddy Feeding Hour”. I was not cool with that. NOT. COOL.

But, plus side, this kid can sleep anywhere. An. E. Where. He’s like a damn cat. He spends the nights in his crib but can power nap on the couch, in a pack and play, in a swing, in a rock and play, cuddling with us, in the Moby, probably on a bed of nails. But I won’t attempt that. Yet.

I still have five pounds to lose and apparently those five pounds reside solely in my butt. None of my pants fit. NONE. Not a fan. But at the same time, I can’t really complain about five @#%! pounds.

The breastfeeding thing officially ended at the beginning of week seven. I had intended to go a little longer but some travel got in the way and it just sort of fizzled out. I was definitely sad when I realized the last session had passed. His little face always looked so peaceful and his naps afterward were so sweet. But whatever, I got over it. Still wasn’t worth the time and stress just for a few cute sighs. Now my boobs belong to me again. And maybe Big A. Maybe.

I also resigned from the marketing job I hated and am trying my hand at the stay-at-home thing. I give myself until the end of the year before I go totally stir crazy. It just didn’t make sense to go to work, leave the kid in daycare and waste a good portion of my paycheck on it. I wasn’t really pulling in the big bucks anyway. I am hoping this blog will help me avoid the mush brain I tend to get during bouts of unemployment.

ALSO DO YOU KNOW HOW MANY CHRISTMAS #!$!%^$# COOKIES I CAN MAKE WITHOUT 40 HOURS OF DESK JOB GETTING IN THE WAY OF THINGS?!

7 thoughts on “8 Weeks and Counting”