Four years ago, this was happening. I was full of hope, dreams, and rainbows. Can’t say the same about this year.

At one point, I openly admitted I would have voted for Jesse Ventura had he ran. I despise Jesse Ventura and the weird-ass legacy he left in Minnesota.

A few days ago, both kids were spinning in circles and Big A declared “it was just like the election!” I wanted to say Mini B was like Hillary, but her hair was all Trumpy-catawampus and she, as Big A stated, “was more hateful” (which is true, she is a fairly vicious little girl). And Little A was just bumping into things and giggling. Abe (the puppy) was running around not knowing what to do, making him Gary Johnson, and the cat peered from around the couch, mostly forgotten. He was Jill Stein. And we laughed. And died a little inside.

I’m not going to say anything else. I already stated that I would have voted for %^%$@#$@^#$T@EF@#$ VENTURA and that pretty much sums up my feelings.

Maybe, like those same-sex marriages, our children will look upon this and see change. Either a woman as a leader, or a non-politician in the role. Maybe this sets off changes that will benefit them in the future. Maybe the country won’t implode.

But maybe it will.

Here is how we spent the morning four years ago: 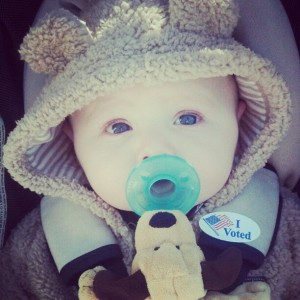 This morning, Mini B sat half naked on the clinic floor, waiting for the pediatrician and eating goldfish. (I would show you a picture but I don’t know the rules on nudity and I don’t want any creepy peepies because eww). Since I can’t vote today (not registered in the state), I figured this was just as fitting. In a diaper, on a floor, eating crackers. Happy and unaware. I may go sit in the kitchen and do the same right now.

Is it too early for a drink?