I am a displaced Minnesotan who loves her birth state and everything within it. I am a faithful Vikings fan. I yell Skol, I make paper towel roll tubes into Gjallarhorns, I force my daughter to wear a Vikings horn winter hat, make mean faces at people in Wisconsin, and get pretty used to post-season heartbreak. It’s sadly become part of our fandom and maybe that makes us endearing and true to our Minnesota Nice moniker. But if you say Gary Anderson in my presence, even if it’s like your triple great uncle’s triple cousin’s next door neighbor Gary Anderson who lived in Alaska and died in 1806, I’m still going to be tempted to throw down in a fit of rage. 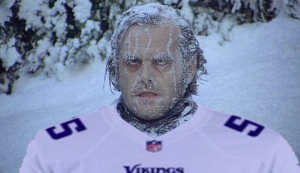 Life as a Minnesota Vikings fan is not easy. It’s dotted with missed field goals, injuries, quarterback turnovers (on the field and off), missed opportunities, and crushing losses.

This season stayed true to our traditions.

As I write this, the Eagles vs. Vikings game rages on, though it’s hard to call it a game (though it was filled with rage). It was a blow out from the first quarter, and while I tried to hang on to hope, the score gap turned into a rut, turned into a valley, turned into a canyon. I turned it off as the touchdown at the end of the third quarter was caught. I have no idea what the score is or how much time is left. But I know we lost. I wasn’t going to sit in front of a blank screen,  so.

This is what I did:

Here’s what I didn’t do:

I never thought I’d be THAT PERSON to cry over a football game, but admittedly, a few tears were shed tonight. I felt it this year. I felt it in my bones and in my heart. The hashtag #bringithome  meant everything, as I still consider it home and I still think of myself as one of them, though I haven’t even lived there since 2005. It’s always my home and I’m always excited to GO home, so the chance of having the first home team hosting the Superbowl be MY home team was just so exciting I could barely stand it! I mean all day today I was pretty much Jessie Spano on pills.

I mean hellooooooo do I have to %^#$! remind you of last week’s Minneapolis Miracle that had me first hiding under a blanket, then to screaming, to jumping and shrieking, to back under the blanket, rolling on the floor screaming HOLY SHIT WHAT JUST HAPPENED. It felt like it was destiny.

This was the boost Vikings fans needed. You guys, we haven’t even been to the Superbowl since 1976 and we haven’t ever WON a Superbowl, though we were in four during the days of the Purple People Eaters. Again, the 70’s, before my time, far far ago in the long away time. And last week we were boosted up up UP only to come crashing down down DOWN in the most embarrassing of fashions.

It was going to happen. We were going to bring it home and into our gorgeous new stadium and into OUR Twin Cities. I mean, it’ll all still be there, but it won’t be nearly the same. It’s now covered with a figurative Metrodome whoopee cushion of sadness.

Tonight was the opposite of what I wanted. No one likes to watch a slaughter of a game. Our season is over, our Superbowl dreams crushed. And while “there’s always next year” and all, there will never again be THIS YEAR that truly felt like it was OUR YEAR.

Please don’t placate us with niceties and pats on the back. Let us wallow in our sorrows, drink our beer, and eat our Wisconsin-imported cheese curds with sadness in our eyes. If you know a Minnesotan, place your hand on their shoulder with a softly spoken “Skol” and offer to buy them a Grain Belt.

I suppose I should see what the score ended to to be. I wish I had a Grain Belt right about now.