Are you seeing this?! Your mom is almost on time with this on!

You turned nine months like a week and a half ago. And you were almost on time for your well baby visit. YOU’RE WELCOME.

Your weight, housed mostly in your cheeks, cranked up to 16lb 110z, which I was proud of, but doc was not so now I get to try and cram more food down your gullet and go back for a recheck in six weeks. Which obviously, makes me only think of: YOU’RE ON THE GRID! EAT!

Thing is, you eat all the fricking time and then don’t stop moving, so clearly the answer is for you to exercise less and nap more.

You’ve still got the murmur, which I keep being told is nothing to worry about.

Which is totally cool. BECAUSE NOW YOU’VE GIVEN ME SOMETHING ELSE TO WORRY ABOUT.

You don’t really say consonants yet and quite honestly, I never gave it much thought. I read somewhere that infants who do well physically may be slower in picking up the verbal. I read somewhere that babies not in day care or around other children may also be slower in verbal development. I heard anecdotes that supported both theories. And since I stay at home and we don’t leave the house, it all made sense.

Sure, there are afternoons when I wish you would read poetry to me instead of screeching like a pterodactyl, but !@#%! you’re a baby. So I shrugged and you screeched and I didn’t give it further investigation.

I mean, for $@%! sake the cardinal rule of baby rearing is that they all have their own pace, right?!

So imagine my surprise when the pediatrician, who normally looks at me like I’m 93.7% crazy when I ask questions about your development, gave my in-passing “yeah but he doesn’t do this” comment a cause for concern.

All of a sudden I’m being talked to about hearing tests and referrals and speech delays and I don’t know what else. 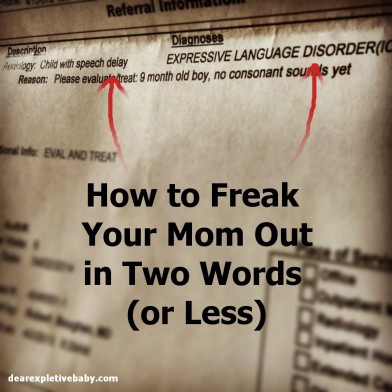 THE ONE TIME I’M NOT CONCERNED I SHOULD HAVE BEEN CONCERNED?!

Now I have a referral that includes the phrase “speech delay” and the word “disorder” but I’m supposed to “not worry”. I blame myself, though for what I’m not sure. We watched too much Full House. You’ll never say ice cream right. I made you nap when we should have been learning Portuguese. I didn’t ask you how big you were. (Hint: SOOOO BIG!). I made you practice fake coughing for future use in your scholastic endeavors instead of saying Mama.

Now I give everything you do the side-eye. I analyze every move, wondering if you’re smart or delayed or an idiot or whatever. Regardless, you’re happy, you still make us laugh and you’re cute as shit.

I BROKE YOU. I’M SORRY. I’ll throw away these Harvard brochures and pick up some applications at Burger King.

You’ve got to be better than McDonalds, right? Mama wants a discount on Frozen Cokes.