Apparently because I get to carry your leecher ass around, that means I don’t have to care about my appearance, my health or my job responsibilities!! YAYYY!

I came upon an article about “Pregnancy Benefits” yesterday. I didn’t expect it to be amazing and real and usable, considering its source. But I read it anyway because I had work to do and I was avoiding it. Read it, made fun of it on Twitter and wound up thinking about it again this morning. It was so stupid it angered me. Read it yourself and then return for my commentary.

So. According to Nickelodeon Parenting or whatever, pregnancy gives me the excuse to be as trashy and rude as possible.

Letting my roots grow out.

Ditching out on work and shopping or napping.

Hogging the TV and being a DVR douchebag.

Thanks, but I’ll pass. I’m not saying I am a perfect work ethic (far from) or that I don’t eat more fast food than I should. But shit, I did that crap when I wasn’t pregnant so I’m not using it as an excuse now. But the slacking on your personal appearance?? That’s just dumb. If you’re feeling fat and bloated and you’ve got a mini monster kicking you in the bladder, wouldn’t you WANT to look good? The one thing you have control over?Why is it a benefit to ignore your charming good looks? More people, including strangers, pay attention to you. Don’t think they aren’t passing judgement just because you’re a baby carrier. BLESS HER HEART she is so in tune with that baby bump she can’t get her hair done or put on real shoes.

F. THAT. And I wear flip flops a lot. In the snow.

Now, granted, I’m early into these shenanigans and three months from now I’ll be saying F@$K YEAH I DON’T HAVE TO PUT MASCARA ON OR DO MY HAIR. But at this point? Yeah, no. I’m the rebel that got her hair dyed at 11 weeks.

And the you-don’t-have-to-go-to-the-gym “benefit”? That’s just irresponsible. While I haven’t gone yet (but I went running once, three weeks ago) I know deep down that I SHOULD go. Telling women they have a built in excuse to avoid working out (unless there’s a smoothie bar hehe) is idiotic. We’re told to do some form of physical activity. But not going is way easier than going so hooray excuses!

I can eat what I want, when I want. IN SEMI-MODERATION.

At some point I’ll take advantage of mom-to-be parking. IN SEMI-MODERATION.

I am sure I will come to appreciate lycra. IN SEMI-MODERATION.

I will cut in line if I am peeing my pants. IN SEMI-MODERATION.

I may be oversensitive to the lolololololol I’m a woman tee hee schtick, though. Which is why I like to troll some pregnancy boards instead of participate.

At some point, I will draw myself being that described, lazy, dirty, scrubby woman – but I’m not drawing that picture at work. I have some dignity to maintain. 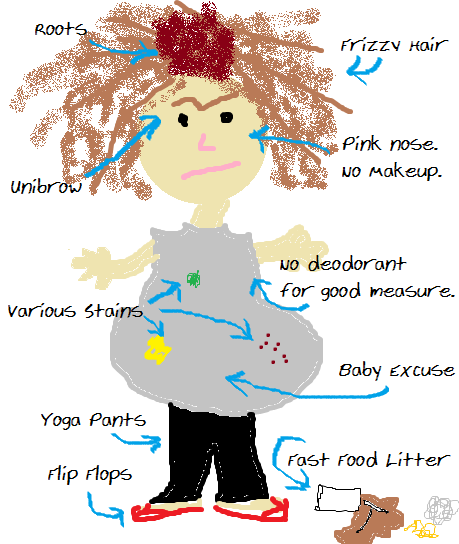 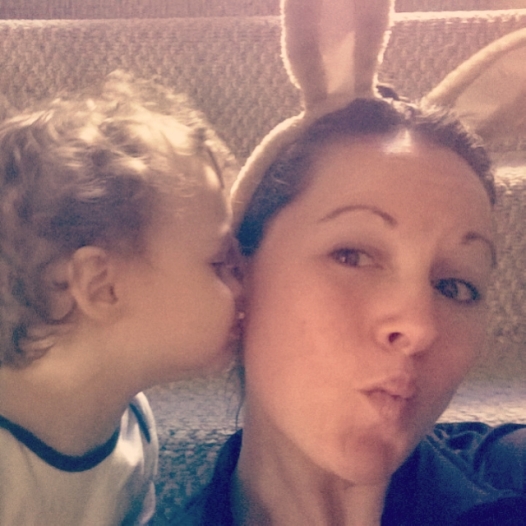