It should come as no surprise, but I totally !@$%! suck at New Years Resolutions. Last year, I shared with you what I planned to do and how blogging about them would maybe hold me accountable. It didn’t. I accomplished 25% of my resolutions. One out of four. ONE.

END_OF_DOCUMENT_TOKEN_TO_BE_REPLACED

And you’re as lazy as me, admit it.

You’d forget about him in three days.

I had to fly home. Again. For a funeral. Again. It was not a pleasant journey.

I have some things to say.

Your “Family Line” is $#@% amazeballs. You allowed me and Squirmy McGee to cut in front of about 150 people and I was through security in less than five minutes. THAT IS AWESOME. I have never seen a line quite so long there and I was not looking forward to standing in it. BUT I DIDN’T HAVE TO. I felt like royalty. It was a bright spot on my crazy ass day.

I was a little worried when you gave me the side eye as you slid into the seat next to me. Everyone at the gate had seen my little $%!# screaming; I knew it didn’t look good. However, I was pleasantly surprised to your willingness to be “patted” by my child and by the ensuing conversation about your children (who are so handsome!). And from the bottom of my heart, I appreciate you allowing my kid to gnaw on your iPhone. That solved a lot of issues and significantly decreased my stress level. And giving my kid a little baseball keychain from your work? ICING ON THE MFing CAKE. Please sit next to me every flight.

Dear FAA, Congress, Government, Whomever else I blamed for the last flying shitshow:

Please accept my sincere apologies. It wasn’t your fault last time. Turns out the little dude is just a bad flyer now. Do not expect this power duo to be on any upcoming flights unless we are accompanied by another adult. I won’t be playing this game alone again.

They aren’t. Here’s why. Babies? They $%@!# FEED off each other. CASE IN POINT: Little A + the Seven Month Old behind us. She would cry, he would cry. She would chatter, he would chatter back. AND HE DOESN’T CHATTER. She would scream, he would return fire. While it was pretty damn cute to have these two babies conversing and love connecting between the seats, I doubt it was adored by others. Little beasts need to be separated.

I would seriously like to crawl into your head and try to see the logic of getting me, my giant suitcase I had already retrieved from baggage claim , a stroller, a diaper bag and a screaming baby back through security to claim my lost item. Your “yeah, I don’t know how that’ll work” was totally unhelpful. I’m just buying a new lost item unless it still happens to be at the gate when my parents pass through this weekend. I ain’t schlepping through the airport for that, especially since I would still have to have the child in tow! I understood the thirty minute wait because you were swamped, but a little empathy could have gone a long way.

ENOUGH WITH THE LIMP NOODLE EVASION TECHNIQUE. I CANNOT HANDLE THAT SHIT OH MY GOD.

I imagine this is actually easier.

We’ve been lucky enough to take several trips with baby in tow in his first year on Earth. And totally lucky that he is an excellent flier – relatively quiet, sleepy, calm. We have the scheduling thing down: plan flights around feeding times, feed him on take off, enjoy the long nap for the majority of the flight. NAILED IT.

Until the FAA steps in and furloughs the crap out of your best laid plans. 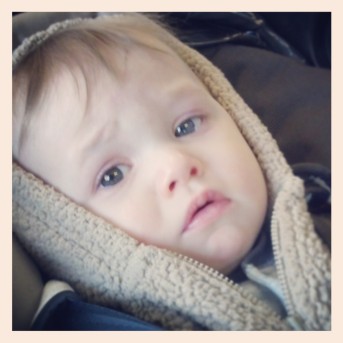 The face of flight delays.

Last week, Little A and I stepped up to the gate in Minneapolis just as they were announcing the 1.5 hour delay. The plane was at the gate. AT. THE. @$#%^ GATE. Delay was caused because of the Air Traffic Controller furlough, blah blah blah. So now there’s a hungry, tired baby who will be forced into a short fast. Otherwise, he will be a wide awake, flailing, screaming baby at 36,000 feet. I don’t want that. You don’t want that. No one wants that. God doesn’t want that.

I wandered the terminal for over an hour, back and forth right and left there and back and over again. At least I got some exercise in. I really wanted a beer. Finally, I could not stand NOT feeding that poor beast so we sat near the gate and he ate. As he finished, boarding began. This might work out okay.

I ASK THAT YOU TAKE NOTICE OF THE MIGHT. 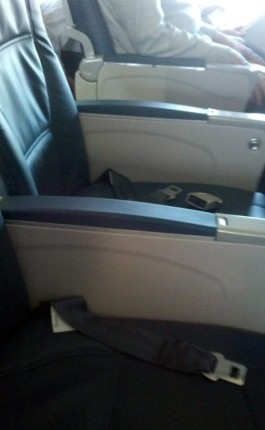 Beautiful in its irony.

I had the row to myself. That never happens! My luck was turning! Except it was bulkhead so the trays were in the arms so the arms didn’t raise so it didn’t @#!%! matter anyway. #!%! you, luck.

Little A pounded on the window for awhile, tried to engage the ladies behind us, continued his quest for the perfect lap triple axle. And we sat at the gate. Because they needed fuel. BECAUSE THEY APPARENTLY DECIDED NOT TO REFUEL WHILE THE PLANE SAT LONELY AND DESOLATE AT THE GATE FOR TWO HOURS. They didn’t turn the air on so it was stuffy as shit and I was left praying that kid wouldn’t decide now would be the time to M his Bs.

Finally we get up in the air; kid immediately konks out. I follow suit. And we sleep through beverage service, beverage clean up and whatever else happens on a two hour flight (the answer is nothing).

HERE’S WHERE IT GETS FUN AND I HATE FURLOUGHS.

Being home with my parents already wonks his schedule. Flight delays increase the problem. Not to mention, by this point I’m the hungry one, not to mention tense from an awkward position with an aching back because I swear the woman behind me found a way to UNrecline my seat every time I fell back asleep after REreclining it.

So let’s review. Hungry baby who loves to crawl who hasn’t touched floor in five hours. Hungry mom who hasn’t been comfortable in five hours. A few dollars saved at the government level to delay a flight two hours.

THIS IS FUN. YAY.

The MINUTE the seat belt sign comes on, Little A goes berserk. Squirming, crying, flinging, back bending, practicing every evasive technique he learned in night school. I can’t stand up to soothe him, I can’t make a bottle, he refuses everything I offer. Blanket? Nope. Rattle? No. Teething ring? Oh, hell no. This is his first melt down on a plane. And I’m trying not to stress cry.

What finally shuts him up? Sitting him between my legs on the floor for the remainder of the descent. My legs were wrapped around him, my arms always underneath him, I’m practically in crash position. Safest decision? Probably not, but no less dangerous than the chances of him flinging himself out of my arms. As we neared ground I put him back in my lap. Magically, on the ground, he went silent.

Those smiles and “sweet baby” comments I got at the beginning of the flight? Gone. I got grimaces and glares and a few “bless her heart” eyes. A snide “well he almost made it” passive comment from the Seat Unrecliner.

I was never one of those damn-it-there’s-a-kid-on-the-plane type of people. Sometimes it was annoying but I could usually dig up enough sympathy to ignore it, even in my bitchiest state. When my kid ended up being the master flier, I internally gloated. Well, so long to that.

Those people hated me for fifteen minutes, FAA, and it’a all your damn fault.

Why do kids love the toys you hate most? Do they have extrasensory perception and think, Oh man. She hates this shit. I’M GOING TO LOVE IT AND GO BATSHIT FOR IT.

The most recent offender? The V-Tech Rhyme and Discover book.

And I want to kill it with fire.

The woman’s voice is flat and condescending. And demanding. “Turn the page!” “It’s time for a rhyme!” “Find the kitty!”

You’re a toy. Let my kid tell YOU want to do.

Sing ME a song, bitch.

On top of that, she starts a song AND THEN REFUSES TO FINISH. The crappy Casio keyboard band keeps playing but she disappears to go chug some vodka. Leaving the parent, presumably, to finish the damn rhyme for her. But guess what! I don’t remember any of that shit.

And add a Samba beat to it. Spice it up.

And, as if that wasn’t enough, if you do remember the words, SHE SINGS DIFFERENT ONES.

Ring around the rosy

The doggy chased the kitty

That doesn’t even rhyme.

I’ll let that sink in.

I also had no idea pockets full of posies were so offensive.

I hate it. I hide it under the crib and use it only in the case of baby melt-down emergencies.